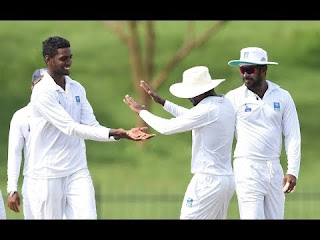 Akila Dananjaya is set to undergo  official bowling action assesment on  November 23 rd in Brisbane and will miss the chance to play the 3rd test against England which will start on 23 rd.

21 year old Nishan Peris has been called to the Sri Lankan squad for the first time to replace Akila Dananjaya.

Nishan Peris Played both warm up matches against England and was able to take wickets of Ben Stokes,Jos Buttler and Moeen Ali.

Nishan Peris has got 38 first class wickets at an average of  29.52 leading up to the Test call.

His career best figures are 6 for 67 in a First class match between  Kandy District vs Galle District.

We wish him the Luck to serve the country for a long time with his talent.
- November 20, 2018