Pakistan Coach happy with comeback of his team 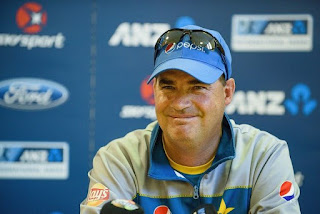 After a dramatic loss for the Pakistan cricket team in the first test against New zeland in which they were not able to chase 175 runs lots of doubts were created in the strength of Pakistan batting order and the ability to chase a score in high  pressure situation as they were not able to chase down very low score against sri lanka also last year which made them loose a series in UAE for the first time.

But the second test was completely different as Pakistan was able to give Newzeland a humilating defeat of innings and 16 runs which helped them to level the series going in to next one.

Pakistan coach is very happy about the performance of Yasir Shah 's superb spell in a very important match and he also appreciate Pakistan Captain Sarfraz Ahmed as a guy who always get the game moving forward while he is on the crease.

Going onto a very important year of worldcup always the trust and bond between coaches and captain could help them a lot moving forward.
- November 29, 2018