Mohammad Abbas likely to be ruled out of 3 rd test 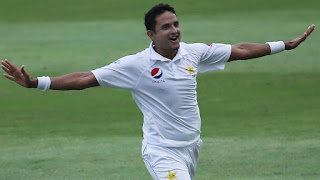 Mohammad Abbas has been a great find for Pakistan cricket team in recent test matches of Pakistan and was able to put so many wickets into his bag .

But he is likely to be ruled out of series decider 3 rd test due to a shoulder injury occured during his fielding effort  during the second test.

Spokesperson has said he was feeling pain in his shoulder and taken to hospital for a scan today.

The decision of exclusion of him from 3 rd test will be taken after results.

If he is ruled out either Shaheen Afridi or Mir Hamza could be the replacement of him as per our view.

This might give a great oppurtunity for young sensation Shaheen to show his potential in test arena.
- November 29, 2018