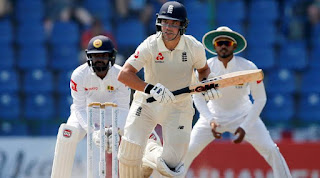 It was a quality test match which swung onto both teams but could surely say England managed to end almost every day on a high even though Sri Lanka managed to take a first inning lead.

As per our view there were 3 instances which changed the match in England's favour.

Next one was Karunarathne's run out by Ben Stokes when him and Dananjaya Desilva was well set to take the game away from them.

Next biggest thing was Sri Lanka loosing three main batsmen just was 26 runs in second inning chasing rather a moderate score of 301.

England finally won the match by 57 runs as sri lanka were bundle out for 243 when they were chasing 301.

Man of the match was Joe Root and with that England managed to win the 3 match series  2-0 with one match still left to go.

Thank you for staying with our live coverage all 5 days on musicworld992.blogspot.com and we hope to come back again with final match of the series.Good Bye!
- November 18, 2018