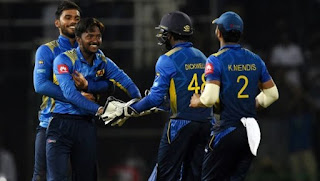 It is all set for the first and only T 20 to be played in the series and after a ODI series where England won first three ODIs and Sri lanka bounce back to win the last ODI  by 219 runs,the highest winning margin for sri lanka in an ODI match against England,both teams are even going into this promising game.

Both teams are going into the team with some changes into the squad taking some T20 specialists into the team.Talking about sri lanka ,the rested sri lankan pacer Lasith Malinga is expected to come into the match and Isuru Udana  will have a chance into the match with his recent good international and APL performances

The new comer Kamindu Mendis has a chance of Making his debut tommorow as the second spinner and bowling all rounder considering inconsistent performance and expensiveness of Lakshan Sandakan in limited over matches .

Kusal Janith is likely to come back to the opening spot considering his fitness before the match as Upul and Sadeera is out of squad.Probable team xi for sri lanka would be:

We will update you regarding the changes and the probable playing xi for England and news  going into the match .Keep in touch with us.