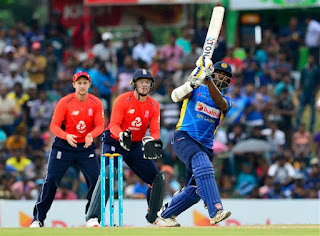 It was a day with a quality performance by sri lanka to add on 273 runs to the board with remarkable performance from dickwella(52) and shanaka(66) with the strong batting performance from sri lankan middle and tail enders making sri lanka looks having the upper hand into the innings break but eventually england got a good opening stand of 52 making things not so easy for lankans.But eventually mistry spinner Akila got through England openers with superb spell making England 76-2.But Root and Morgan dragged them into 132-2 when rain arrived when duckworth lewis par score was just 114 with root getting lucky escape to stay in the wicket after his catch was taken in a no ball.
It was unlucky for Sri lanka but they could find main 3 positives out of Dickwella's,shanaka's and Thisara's performances to stabilise the inning going into worldcup.
- October 21, 2018