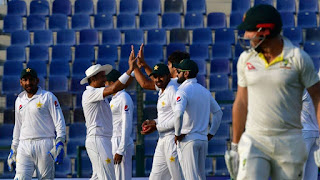 It was a dominent performance by pakistan players to clinch the victory over Aussies in the 2 nd test beating them comprehensively by 373 runs just in the second session of 4 th day.Pakistan team was earlier in trouble in the first session of first day for not many runs .But they managed to get 282 on board thanks to brilliant partnership of Zaman and  captain Sarfraz.Aussies were bundle out for just 145 and 164 in both innings putting up the marathon spell of Nathon Lyon in vain in pakistans 2 nd inning score of 400/9 in second inning.Mohammed Abbas was the man of the match with his 10 wickets in the match and Zaman Sarfraz and Azam managed to score 90+ for Pakistan in their way to the victory.

IT IS THE END OF THE TEST SERIES BUT WE INVITE ALL OUR CRICKET LOVERS TO STAY WITH US FOR UPDATES ON IND vs WI ODI SERIES AND PAKISTAN VS AUSTRALIA T20 SERIES.Good bye for now from 'D FACTO' team .Do not hesitate to like our FB page 'D FACTO'.Cheers!!!
- October 19, 2018